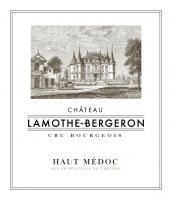 Chateau Lamothe Bergeron is a wine estate in the Médoc. It is considered as one of the main red Crus Bourgeois since the 19th century and remains confirmed in this status today. The estate is located in the commune of Cussac Fort Médoc, in the Gironde department, in the Nouvelle Aquitaine region. Find out more

The History of Chateau Lamothe Bergeron


Château Lamothe Bergeron already existed in the Middle Ages, but only the plans remain from that time. The history of the domain is better known from the 15th century. It belonged to the Lauste and Martel families until it was sold to François Jacques Marie de Bergeron (1760 - 1810). This agronomy enthusiast traveled and published the results of his discoveries in scientific journals. When he died in 1810, he left a wine estate of great quality, producer of Médoc wines, already famous.

The vineyard covers 67 hectares: 52% are planted with Merlot, 44% with Cabernet Sauvignon, 2% with Petit Verdot and 2% with Cabernet Franc. The estate works to respect biodiversity, which has earned it HVE (High Environmental Value) certification since 2018.

The vintages of the Cru Bourgeois of Château Lamothe Bergeron


The wine is a blend of 55% Cabernet Sauvignon and 45% Merlot. The very wet winter and spring earn the 2018 Cru Bourgeois a wonderful aromatic complexity. Ripe black and red fruits dominate and bring a delicious roundness, backed by a solid structure.

Its color is an intense ruby and the wine offers a balanced palate, with silky tannins that make it very pleasant. It has a fresh finish. It is a wine that has personality and adapts very well for aging. It goes wonderfully with roast rack of beef, as well as white meats with mushroom sauce.


The 2014 Château Lamothe Bergeron Cru Bourgeois benefits from the mild spring and early summer weather, followed by the hot, dry summer. It offers a fresh bouquet, scented with red fruits and black currants.

It has the particularity of being also perfumed with the scents of a slightly earthy undergrowth, which gives it a great originality. This structured wine with crisp tannins accompanies your meats in sauce, as well as braised pork filet. It is one of the wines that can be kept for a long time, allowing it to improve.