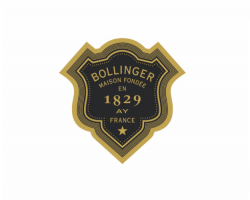 Renowned for its excellence, the Bollinger House remains one of the last Champagne houses to produce the majority of the grapes that make up its vintages, mainly Pinot Noir from the Grand Crus plots. Because of its reputation and its know-how, the House seduced the Crown of England and has since been one of the official suppliers to the Court. Find out more

The history of Bollinger champagnes goes back to 1700

.
It all began in the 1700s with the De Villermont family. At that time, the name Bollinger was not yet present. The De Villermont family settled in Ay in 1650 and produced a good quality sparkling wine. However, Athanase Louis Emmanuel Hennequin, known as Count de Villermont, was an aristocrat. As such, and according to the laws of the time, he is not allowed to market alcohol. This did not bother him, as he did not want his name to appear on bottles. This is why, in 1829, upon returning from a stay in the United States, where he was fighting as a naval officer, he decided to join forces with two bourgeois merchants and experts in viticulture : Paul Renaudin and Jacques Joseph Bollinger.

This is how the Bollinger-Renaudin campaigns were born. The name Renaudin will disappear in 1960. This is because Paul Renaudin had no children. Following the death of his widow, and after a period of reflection, it was decided to withdraw his name from the brand. The Villermont and Bollinger families remained united thanks to the marriage of Jacques Joseph Bollinger to Charlotte de Villermont. Today, this great family still reigns over the family business and the vines.

It is Joseph and Georges Bollinger, the couple's children, who will make the estate grow and evolve by buying several vineyards. At that time, Champagne Bollinger-Renaudin saw its fame grow steadily thanks to the orders of several European monarchs. Let us note for example that in 1884, the Queen of England endorsed champagne and made it one of the official suppliers of the British court.

The grandson, Jacques, like his grandfather, took over the reins of the house in 1918. Upon his death, however, his widow, Elizabeth Bollinger, became the head of the estate until 1971. At a time when women were rarely in power, she was a masterful leader of the family business. It was she who created the great vintages and the great cuvées that made Champagne Bollinger's reputation grow.

Today, Champagne Bollinger is known for its know-how and exceptional quality. It is easily classified as a luxury champagne. For the younger generation, it is the champagne of James Bond. Indeed, the famous British hero always takes time to drink a glass in each opus.

The Bollinger vineyard is largely based on Pinot Noir grapes.

The vineyard of the family Bollinger extends over 178 hectares around Ay in the Champagne region. 100 are dedicated to the Pinot Noir which is the trademark of Bollinger champagnes. It is this grape variety that will give the wines their perfect structure. These vines are perfectly aligned, it is the major visual characteristic that allows to recognize Bollinger vineyards. 85% of grape variety is dedicated to the great and premier crus. There are seven main vineyards: Ay, Avenay, Tauxières, Louvois and Venerzay dedicated to Pinot Noir, Cuis for the Chardonnay and Champvoisy for the Meunier..

The Bollinger House is the last to have its own arborist. He takes care of the maintenance of the barrels, some of which are over a hundred years old. Of course, he also makes some more modern barrels while respecting an ancestral fabrication. More than a know-how, it is a French heritage that is more and more rare.

What is the style of Bollinger Champagnes?

The Bollinger Champagnes are refined and complex wines.The vine is worked to bring you powerful wines that leave all their place to the aromas of the vine.The beloved Pinot Noir and its blue berries almost black will bring all the power and character to the champagnes. The Chardonnay will slightly soften the important presence of the Pinot Noir, and its small yellow berries will bring hazelnut and citrus fruit aromas. Finally, the Meunier, a very juicy grape variety, will bring roundness.

Bollinger only works with quality grapes to create exceptional wines. The house makes to age its wines as long as necessary, exceeding most of the time the standards of the A.O.C. This is what makes the champagnes even more delicate and their texture more velvety. Excellence is the key word of the house.

What are Bollinger's grands crus?

It is a red wine produced in a rather secretive way, 100% Pinot Noir aged 8 months in oak barrels. It is a tannic wine with aromas of black fruits and elderberry.

It is a champagne with very fine bubbles with 60% Pinot Noir. It is characterized by a great aromatic complexity with notes of ripe fruit and spices and in the mouth, pear and brioche aromas. It will be the perfect accompaniment to your fish and shellfish dishes as well as your white meats.

It is a fresh and structured champagne that has been blended with 5% red wines. It is a subtle and deep champagne that reveals red fruit aromas. You can enjoy it with your fruit desserts, shellfish dishes and Japanese meals.

It is a hand disgorged champagne whose fermentation is entirely carried out in oak barrel. It is a very expressive golden wine. On the nose, one can distinguish notes of apricot and hazelnut with hints of honey. On the palate, it is a textured and structured wine with a satin effect. Serve it between 8 and 10 degrees to highlight its exceptional style. It is available in a rosé version, which makes it more gourmet and creamy on the palate.

It is an exceptional vintage. It is an incredibly fresh and aromatic champagne. Its maturation time exceeds the rules of the appellation by a factor of 4. It is a brilliant and deep champagne with aromas of fruit, mirabelle plum and orange at the top. Generous, in the mouth it reveals intense sensations of candied fruit and tarte Tatin.