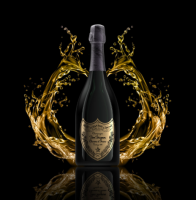 The Dom Pérignon cuvées are a living and ever-renewed tribute to Dom Pierre Pérignon considered as the spiritual father of champagne. Men of the church were of paramount importance in French viticulture. From the monks of the Middle Ages to Canon Kir, passing Dom Pérignon, they have never stopped innovating. Dom Pérignon is an excellent example of this inventiveness, because we owe him nothing less than the invention of champagne, which contributes to our world renown. From blending to delicate adjustments, Dom Pérignon champagne finds its balance by reinventing each time in an original way the alliance of "white" and "black" grapes, from two traditional Dom Pérignon grape varieties, Chardonnay and Pinot Noir. Today, the mission of perpetuating the spirit of Dom Pierre Pérignon has been entrusted to Richard Geoffroy, cellar master and creator of the Dom Pérignon Vintages. Find out more

The history of the monk Dom Pérignon


Dom Pierre Pérignon is a Benedictine monk who lived in the monastery of Hautvillers towards the end of the 17th century. He has - modestly - set himself the goal of creating the best wine in the world. To this end, he tests blends and manipulates his bottles until he is satisfied. The invention of champagne is controversial, but this is the version that comes up most often. In the monk's time, bottles were corked with wooden pegs and decorated with oil-soaked oakum. The watertightness was respected, but, for aesthetic reasons, Dom Pérignon blocked the neck with beeswax, which was much more discreet. However, he had not foreseen the chemical reaction, which had the side effect of provoking a second fermentation, which caused the bottles to explode when they could not resist the pressure. The champenoise method was born!

Thanks to Dom Pérignon and his work on the assemblages, the abbey overlooking the Marne valley experienced a dazzling prosperity and his estate was enriched with new vines. Wines were sold at that time at prices up to three times the prices usually charged in the rest of France.

One of the monks who succeeded Dom Pérignon undertook to write a work which presents itself as a treatise on the vine. It details in 35 chapters all the precepts of the winemaking monk and describes the methods of wine making, harvesting and vinification. The Champagne Dom Pérignon has since invited itself on the tables of the greats of this world, starting with the Sun King, Louis XIV, who was won over by the quality of Dom Pérignon's blend. On the fictional side, James Bond has become the luxury ambassador for this prestigious brand.


The Champen vineyard Dom Pérignon is one of the most prestigious French wine estates. Located on the terres de Champagne, it extends around the commune of Épernay in the Marne. Now owned by the major luxury group LVMH, the vineyards cover more than 1,200 hectares. The vines are 60% white Chardonnay and 40% Pinot Noir. The vines grow on soils composed of limestone and chalk, in a mild climate.

The quantity of Dom Pérignon champagne produced remains a secret, but it is estimated that between 5 and 6 million bottles are produced each year. The wines produced are white and rosé and respect the traditional champagne winemaking method. Dom Pérignon produces a sparkling wine with a great finesse of texture. Dom Pérignon champagne can be drunk young, but its aromas gain in refinement with age and the wine becomes more supple and elegant wine.

.
The Dom Pérignon exists only vintage, thanks to the drastic selection of the best grapes chosen each year. Each grape seed has its own particularities and reflects the uniqueness of its year. To quote a famous year, let's think of the vintage of the year 1949. Its bottles were served during a meal at the American Embassy in Paris where the prestigious guests were Charles de Gaulle and John F. Kennedy. Note in passing that Dom Perignon was Marilyn Monroe's favorite champagne. Very popular at the English court, Dom Perignon was the brand chosen for the wedding of Diana Spencer (Lady Di), and Prince Charles.

The concept of plenitude according to Dom Pérignon


Starting from the principle that every millesime of Dom Pérignon champagne is unique, it is impossible to paint a very accurate portrait of it. However, it is still an exceptional champagne whose style, always perfectly balanced, is timeless. The sensation of its mouth offers a great lightness and an airy suppleness, from the first impression to the last aromas.

As a symbol of luxury and refinement, Dom Pérignon, through its cellar master Richard Geoffroy, has developed a concept that he has called "Plénitude". It is about extremely prestigious cuvées that are sold all over the world. Plénitude has practically become a brand on its own. It is the result of the blending of the greatest vintages that grow in Champagne and the result is a nectar of the highest quality.

Plenitude exists only in certain years, the best ones. Richard Geoffroy started from a very simple premise by observing that the evolution of wine is never linear, but always proceeds in stages. Dom Pérignon is a champagne for laying down which always gains in quality with age, but this improvement is made in stages. However, rather than speaking of stages or steps, the famous cellar master preferred to pay tribute to the excellence of the Dom Pérignon by applying the word "plenitude".

He then distinguished three degrees of plenitude, which led him to label the champagnes with the code names P1, P2 and P3. A bottle corresponding to the first degree of fullness must reach at least 7 years of conservation under the best conditions. A bottle of second plenitude will have exceeded 15 years of age. The third plenitude is reserved for bottles between 25 and 40 years old. Just as much as the vintages, it is also the plenitude that defines the characteristics of a bottle of Dom Pérignon. This denomination adds to the precision to know the peak of intensity of the champagne that you are going to select.

With each new plenitude, the taste of the champagne becomes more complex, while its spicy and iodized characteristics become more present. A bottle of Dom Pérignon represents for some an investment, just like an art object. The prices also evolve with the degree of fullness.

However, you should not focus on fullness, because Dom Pérignon remains a champagne of the highest quality, even when served young.