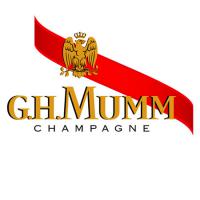 The Mumm family has been in the wine business since 1761. Originally, it was Peter Arnold Mumm, a German banker, who decided to start this business. The Cordon Rouge cuvée is the signature cuvée of the House of Mumm. Find out more


The story begins in Germany, in Cologne. It is thanks to the production of an exceptional Riesling that the Mumm family becomes known and then becomes one of the great fortunes of the viticulture. His three sons would follow in his footsteps and create in 1827, in association with a French producer, G.Heuser and a German investor, F.Giesler, an equivalent activity for Champagne in Reims. The company was then called P.A MUMM Giesler and Co.

It was not until 1852, when Georges Hermann Von Mumm - grandson of the creator - took over the management of the company, that the name became G.H MUMM.Under his leadership and thanks to his passion for travel, the house would become the first exporter of Champagne. Thanks to him, the house will take a major turn towards modernity. He decided to invest in innovation and in stone by buying new and more modern premises.

It is he who will create and register the "Cordon Rouge" brand that is today the graphic signature of the House of Mumm. It is the famous red band arranged diagonally on the labels. He and his successor, Georges Robinet, a family friend, will be for recognized for their social advances. Indeed, they provided housing and education to the families of the wine workers.