Price drop on EU delivery starting from 9,90€ per shipment*. 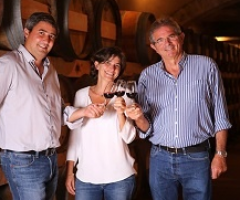 Vignobles Bayle-Carreau is a group of six Bordeaux châteaux on the right bank of the river, belonging to the Côtes de Bourg and Blaye Côtes de Bordeaux appellations. The group was born from the marriage of two families who vowed to unite both in life and in the running of the estate, to the delight of wine lovers who have the chance to taste the exquisite wines of the family's various châteaux. Find out more

The union of two families


The Bayle-Carreau Vineyards are, as one might expect, the result of the union of the Bayle and Carreau families. Each had already gone their own way. On the one hand, in 1852, Antoine Carreau acquired Château Barbé, an estate with optimal exposure. Under the impetus of his descendants, the vineyard was enlarged, even doubling its original surface. The estate was then passed on from generation to generation until Claude Carreau. On the other hand, the Bayle family did the same and in 1910, Emile Bayle bought Château La Carelle. He exploited the vineyard with his son André who greatly contributed to the reputation of the estate. In 1952, André Bayle's daughter, Jeanne-Marie, married Claude Carreau. The families decided to join forces and continued to run their estates side by side. This rapprochement allowed them to share the best practices of each farm, to improve the quality of the production and sales. Over the years, the Bayle-Carreau family successively acquired four additional estates: Château Pardaillan, Château Eyquem, Château Landreau and Château Sainte Clotilde. The children and grandchildren of the founding couple are now at the helm of the estate and are making the wines shine on the international scene.

A historic property of the family group, this estate sees its 20 hectares spread out sometimes on a plateau, sometimes on hillsides, all of which benefit from an optimal southern exposure for ripening fruit. From this vineyard come three cuvées: a powerful and fruity red wine and two white wines, one dry, lively with marked citrus notes, the other sweet with exotic fruit aromas.

The first acquisition of the Bayle family, Château La Carelle enjoys a particular geology as its soils are clay and sand, which facilitates the work of the land and confers a special aromatic profile to the house red wine. This cuvée is supple and refined and expresses notes of raspberry and black currant.

Acquired in 1975 by the Bayle-Carreau Vineyards, Château Pardaillan spearheads the family's commitment to environmental preservation. Farmed with respect for biodiversity and integrated farming, it produces a woody, balanced red wine with silky tannins.

The latest addition to the Bayle-Carreau family, straddling the communes of Blaye and Plassac, the exposure of the south-facing parcels facing the Gironde on a clay-limestone terroir means that Merlot behaves wonderfully there, but also Cabernet Sauvignon, which finds a filtering soil. The mansion that dominated the hillside was bombed in 1944 by the British during the reconquest of this bank of the Gironde occupied by the Germans. This house has never been rebuilt. This property is the driving force behind the estate's natural wines with the 1st vintage without added sulfites in 2020, a Terra Vitis and HVE3 certified vintage.

Château Eyquem is the Bayle-Carreau Vineyards' flagship wine tourism property. It is here that the group offers visits and tastings of the wines of the house and in particular the Côtes de Bourg Château Eyquem, an elegant and racy wine with excellent ageing potential from a reasoned viticulture as well.

Home to Cyril Jourdan, current CEO of Les Vignobles, Château Landreau was reconstituted from scratch after being completely abandoned. It has all the characteristics of a vineyard of exceptional quality, which is demonstrated through the house red wine, on the fruit but characterized by a beautiful tannic structure.