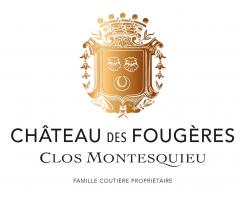 The Château des Fougères Clos Montesquieu is a wine estate located on the left bank of the Bordeaux vineyard, in the commune of La Brède. It produces AOC Graves wines. The wine-making facilities are constantly being improved in order to produce a wine that reflects its terroir and heritage. Today, the vineyard has a total area of 14 hectares, divided between Cabernet Sauvignon, Merlot, Sauvignon Blanc and Semillon. Find out more

The History of the Castle

In the early 18th century, the property belonged to the philosopher's father. After many changes of ownership, his descendant Gaston de Montesquieu acquired it and gave it a new identity that has since been preserved.

The building was at first only a rectangular chartreuse with a square tower at each corner. A century later, Gaston de Montesquieu renovated it and added the south wing and made it a hunting lodge, as evidenced by the exterior decorations of the charterhouse.

In 1986, Gaston's great-grandson, Baron Henry de Montesquieu, took over the vineyard, reviving the activity that had been the life's work of his illustrious ancestor.

Then in 2010, the Baron's family moved to Paris and, after many friendly meetings with his potential buyer, the Baron sold the estate to Mr. Dominique Coutière, a captain of industry from the Landes region, who was very involved in local life, with the certainty that the reputation of the vineyard would remain among the best and that the château would be well maintained.

Mr. Coutière, a history buff and founder of the Biolandes Group, acquired the Château des Fougères and its vineyards in order to preserve its architecture and develop the reputation of its vineyard, which was essentially planted with red grapes.


We are constantly working to improve the vineyard and soil and have initiated a program to reduce the use of non-organic inputs with organic fertilizers and mechanical weeding of all plots.

The winemaking facilities are constantly being improved to produce wines that faithfully reflect their history, terroir and high quality. For example, a portion of the 2020 harvest is being aged in an amphora.


The total area of the property is 55 hectares, and the vineyards cover 12 hectares.

The soil is gravelly on a subsoil of clay, sand and limestone.

The vines were planted between 1986 and 2014 and today they are constantly maintained and cultivated.

We continue to develop vine and soil improvement and have initiated a program to reduce the use of non-organic inputs with organic fertilizers and mechanical weeding of all plots.

We also sow our plots with green manures, a combination of grasses, legumes and crucifers to improve soil life. Our goal is to obtain the HVE label in 2021.

And in order to keep our wine in the leaders of Bordeaux Graves, the property and its wines have long benefited from the advice of oenologist Stéphane Derenoncourt and his team.


The aging wine, named "CHÂTEAU DES FOUGÈRES Clos Montesquieu" is aged in oak barrels for 14 to 16 months (at least 30% of which is new oak), and is composed of approximately 70% Cabernet Sauvignon and 30% Merlot, resulting in an elegant, complex and very aromatic wine true to the terroir of Fougères.

The other cuvée, named "La Raison de Montesquieu" (or "Rouge Fougères") is a very attractive and fruity wine that is aged in vats for 14 to 16 months and is usually composed of about 30% Cabernet Sauvignon and 70% Merlot.