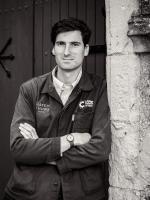 The Château d'Épiré is a vineyard located in the commune of Savennières, in the department of Maine et Loire, in the Pays de la Loire region. It produces Anjou wines. Find out more

The History of the Chateau of Épiré


The Château d'Épiré is a family property that is now located in the commune of Savennières, but previously belonged to the commune of Épiré which merged with its neighbor.

The estate has belonged to the same family, the Bizard's, since the 17th century, who have passed on their winemaking tradition and know-how from generation to generation. However, this terroir had already been occupied by vines for a long time, as the Cistercian monks who founded the church of Épiré in the 11th century were already cultivating vines.

From the 17th century, the Château d'Épiré was passed down from mother to daughter for several generations. Its last heiress before the Bizard family bought it was Elisabeth Poudret de Sevret. She was the wife of Emmanuel Pons de Las Cases, son of the famous memorialist of Napoleon and page of the Emperor during his exile in Saint Helena.

Only a few weeks after her marriage, her young husband died of pneumonia, in 1882. Having no heir, Elisabeth de Las Cases bequeathed her estate to her friend Théophile Bizard. He settled in the castle and decided to perpetuate the wine tradition of Château d'Épiré.

His son, René Bizard, inherited the estate in 1905. He was able to get his hands on the old church of Épiré - which dated from the 12th century and was not maintained - to transform it into a winery. Between 1959 and 1984, the estate was managed by Armand, René's son. He restructured the vineyard to improve production and began exporting his wine to the United States.

Between 1984 and 2018, Armand's children, Luc and his sister, took over the operation. They further expanded the vineyard and modernized the winery. In addition, they continued to export the production, almost everywhere in the world. Since 2018, the Château d'Épiré is held by Paul Bizard, fifth generation of the family.


The vineyard of Château d'Épiré occupies a rocky spur on the north bank of the Loire and benefits from the mildness of Anjou that is attributed to the largest wild river in Europe. The wines of Château d'Épiré take advantage of the schist contained in the soil that brings its specificity to the wines of Savennières.

The Savennières appellation tolerates only one grape variety, the Chenin, which has been cultivated on the banks of the Loire since the 9th century. It has the advantage of being used to make dry, sparkling or sweet wines.

Chenin is considered as a chameleon grape variety. It soaks up the soil on which it grows and then expresses the characteristics of each soil. When grown on the shallow schist soils of Savennières, it gives the wine from which it is made freshness, linked to a notable minerality.

Château d'Épiré is grown as naturally as possible, with manual harvesting. In order to ensure the ripeness of the fruit, it is not uncommon for the pickers to have to make two or three passes through each row.

The wines of Château d'Épiré